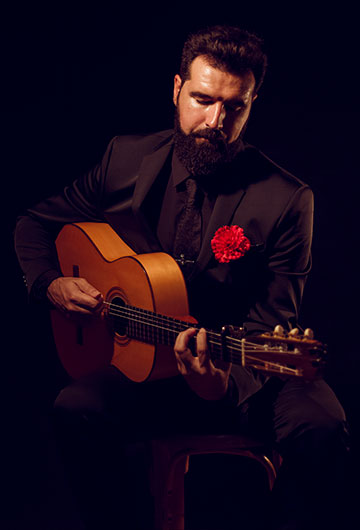 Granada, 19 May 1981. He began his passion for flamenco guitar at the early age of 12 when he decided to study at the municipal school of music in Almeria. Years later he would also do it in the conservatory in the flamenco guitar modality, however, it was in the peñas and bodegas of this city where he really began to develop as a flamenco musician and where he discovered the magic of accompanying singing. Specifically, it was with the cantaor from Jerez, Pepe Ortega, who at that time lived in Almería and with whom he became close friends. As for his development as a soloist, he has drank from so many and varied sources as great guitarists has our land. The Jerez touch is his reference. Nevertheless, he has received courses and masterclasses from great guitarists from Almeria such as Tomatito and Antonio Luis López among others. Among his works and collaborations, it is worth highlighting: his work in the Compañía flamenca de Carmen Guerrero during his two years of residence in Cádiz. The Guajira Trio during 2012 and 2013. He currently enjoys playing with LA MILONGA FLAMENCA, with whom he has recently recorded the guitar on the album "Tango y bolero con flamencura".